Betye Saar first exhibited her work at LACMA in a 1973 exhibition titled Dimensional Prints. The show included pieces by 13 Southern California artists who—according to the museum’s April members’ calendar that year—“in a highly creative and individualistic manner, departed from traditional graphic art processes in an exploration of the presentation and perception of three-dimensional images.” 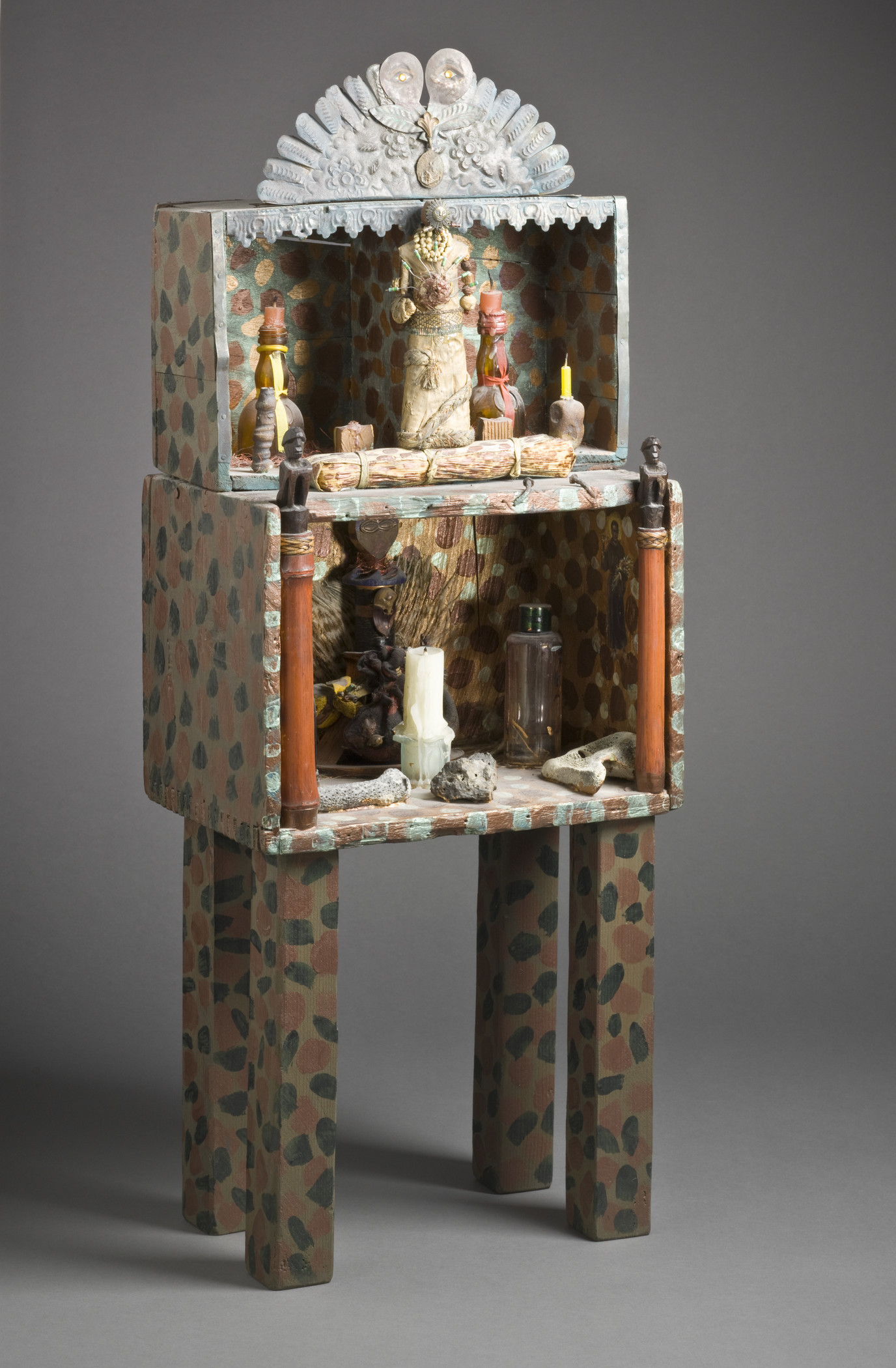 LACMA subsequently acquired several of Saar’s prints, but when I arrived at LACMA in 1984 as a curatorial assistant, the museum still did not own any of her signature assemblages. Recognizing that this was a gap in our holdings that needed to be filled, I reached out to the artist—whom I had not met previously—to see what works might be available for acquisition (Saar did not have formal gallery representation at that time). After a studio visit and a long conversation, and with the financial assistance of the now-defunct Richard Florsheim Art Fund, LACMA acquired Gris Gris Guardian (1990–93), an exemplary work with ritualistic and spiritual overtones that is steeped in diverse cultures including Native American, Mexican, Indian, Filipino, Balinese, Aboriginal, and Haitian. Through this acquisition, Saar and I became friendly, and I continued to follow her work.

Cut to some 20 years later. Early in 2016, I once again reached out to Saar, as I was interested in organizing an exhibition of her work for the museum. During another fascinating studio visit that spring, I asked her, “If you could do anything you wanted at LACMA in terms of an exhibition, what would it be?” Then almost 90 years old, Saar replied that she wanted to spend as much time as possible in her studio, making art, and that she’d like to do a small show that included some new work. My immediate thought was, “My hat is off to you, Betye Saar. Instead of reliving the past and combing through old transparencies in service to a retrospective exhibition, here is a truly creative soul whose greatest excitement revolves around work yet to be made.”

We began considering various possibilities for the sort of show that Saar had described. It just so happened that her gallery had recently created a beautifully designed foam-core storage box for some dozen of her travel sketchbooks. Saar proudly showed me the box and its contents, and I instantly fell in love with the (absolutely gorgeous) sketchbooks.

She and I began talking about how we might envision a show around her sketchbooks—not only those she kept on her travels but also her more informal working sketchbooks, which she also generously shared with me—and the core idea for Betye Saar: Call and Response was born. 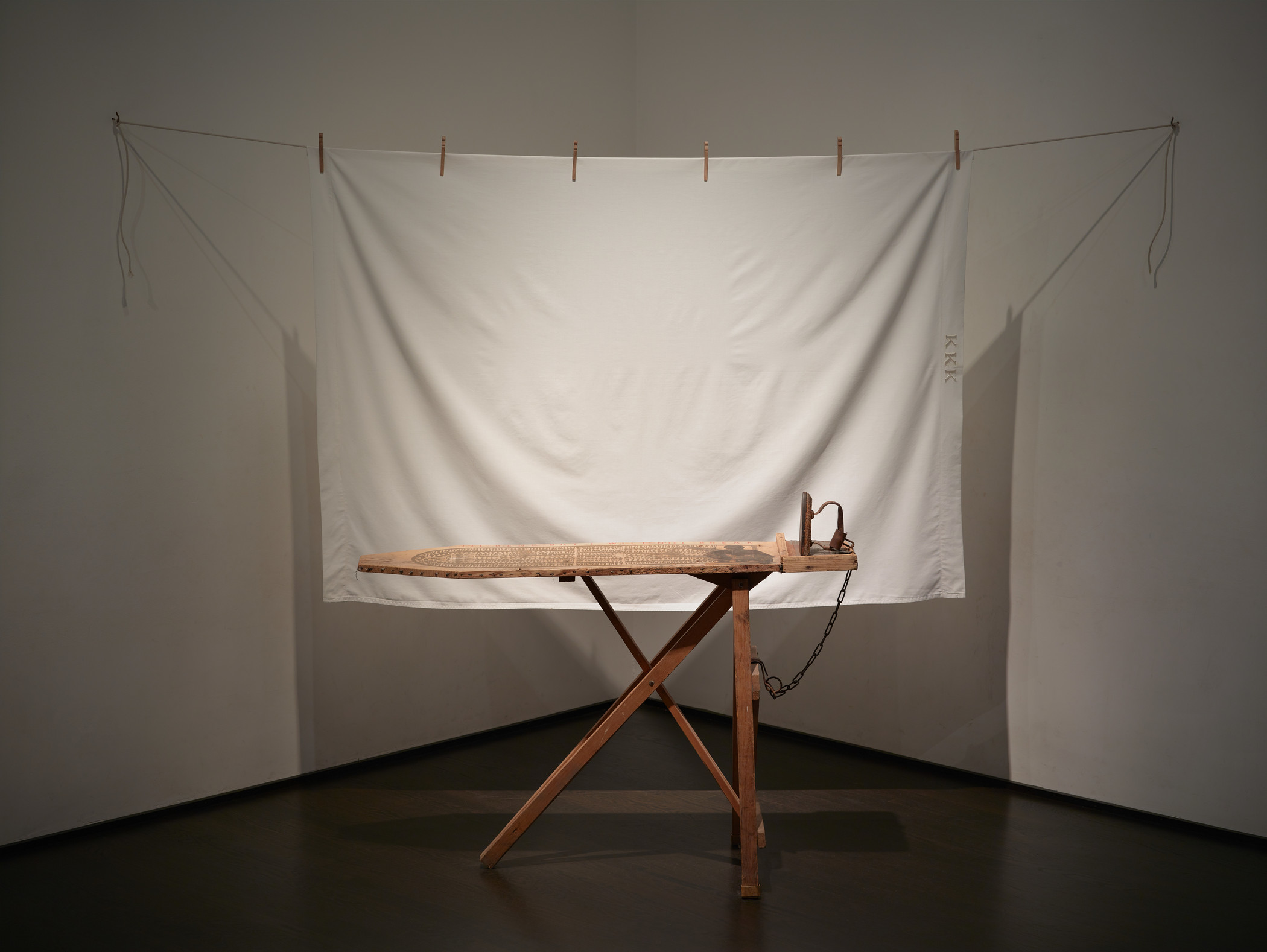 Betye Saar, I’ll Bend But I Will Not Break, 1998, Los Angeles County Museum of Art, gift of Lynda and Stewart Resnick through the 2018 Collectors Committee, © Betye Saar, photo © Museum Associates/LACMA

In the intervening three years, I have had the honor and pleasure to spend many afternoons with Saar in her studio, looking through her sketchbooks and speaking with her about her work. In the interim, LACMA acquired I’ll Bend But I Will Not Break (1998), a powerful tableau addressing issues of race and gender, for which Saar made multiple sketches.

Left: Betye Saar in her studio with the Brookes diagram, courtesy of the artist and Roberts Projects, Los Angeles, California, photo by David Sprague; Right: Betye Saar with a sketch of the ironing board in I’ll Bend But I Will Not Break, 1998, photo © Museum Associates/LACMA

As seen in the related sketches, Saar based the image on top of the ironing board on a well-known 18th-century English abolitionist print depicting how scores of Africans were packed into the lower deck of the slave ship Brookes during its journey through the Middle Passage. She in fact has a blowup of the image in her studio and refers to it as part of her visual language. 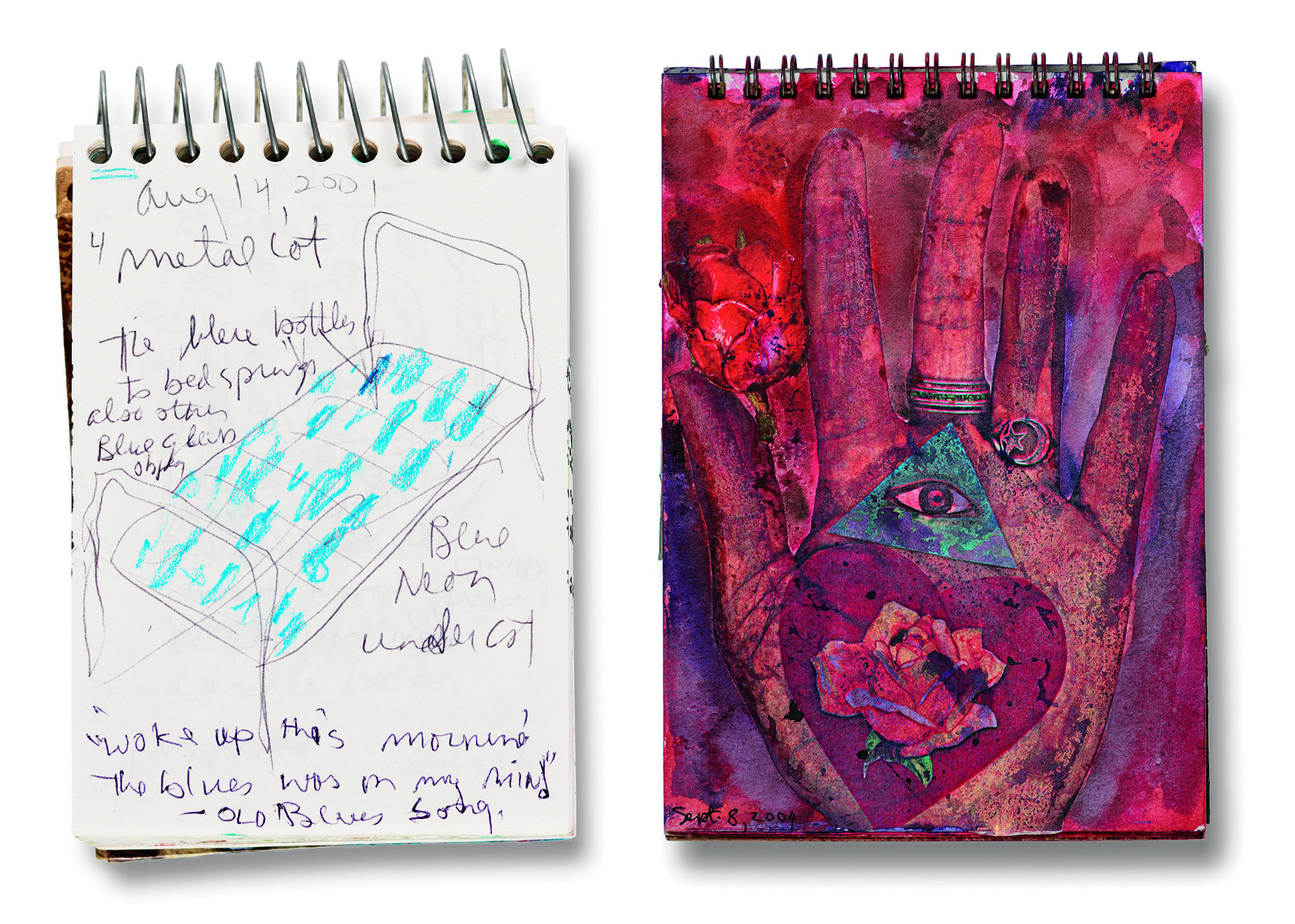 Saar also began work on an installation, revolving around a used metal army cot, which she had envisioned in sketches as early as 2001; but because she never had an opportunity to exhibit such a work, she never realized it. This would be the new work for Betye Saar: Call and Response. She had used the cot in two earlier installations, one at MOCA in 1990 and one at the University of Central Florida, Orlando in 1994, dismantling each of them afterwards, retaining the cot for future use. As Saar has acknowledged, she loves not only using recycled objects but also recycling them herself. In connection with this piece, I put out a call on Saar’s behalf to the LACMA staff for blue glass bottles, receiving an enthusiastic response from my colleagues as well as from family of former staff as well. 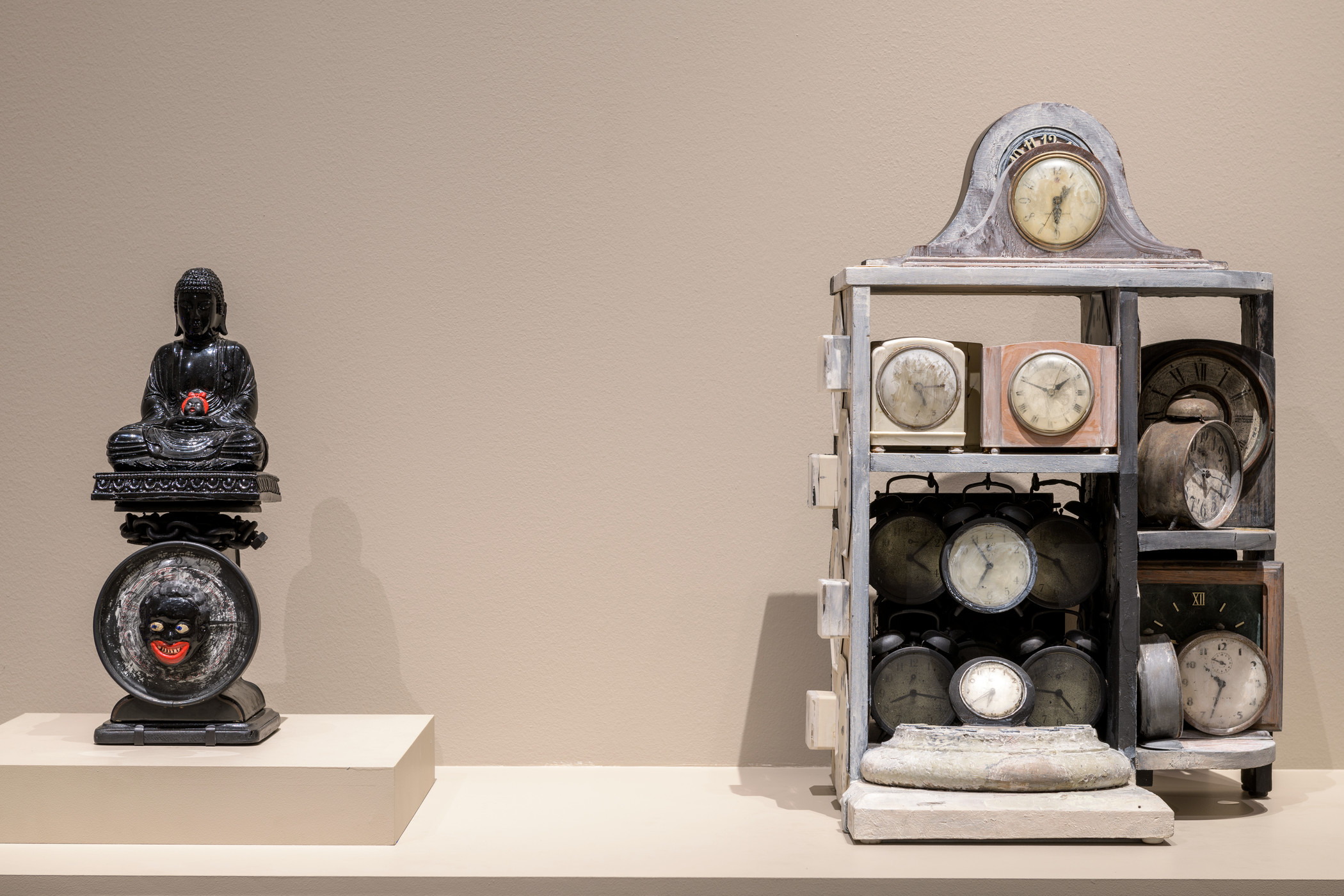 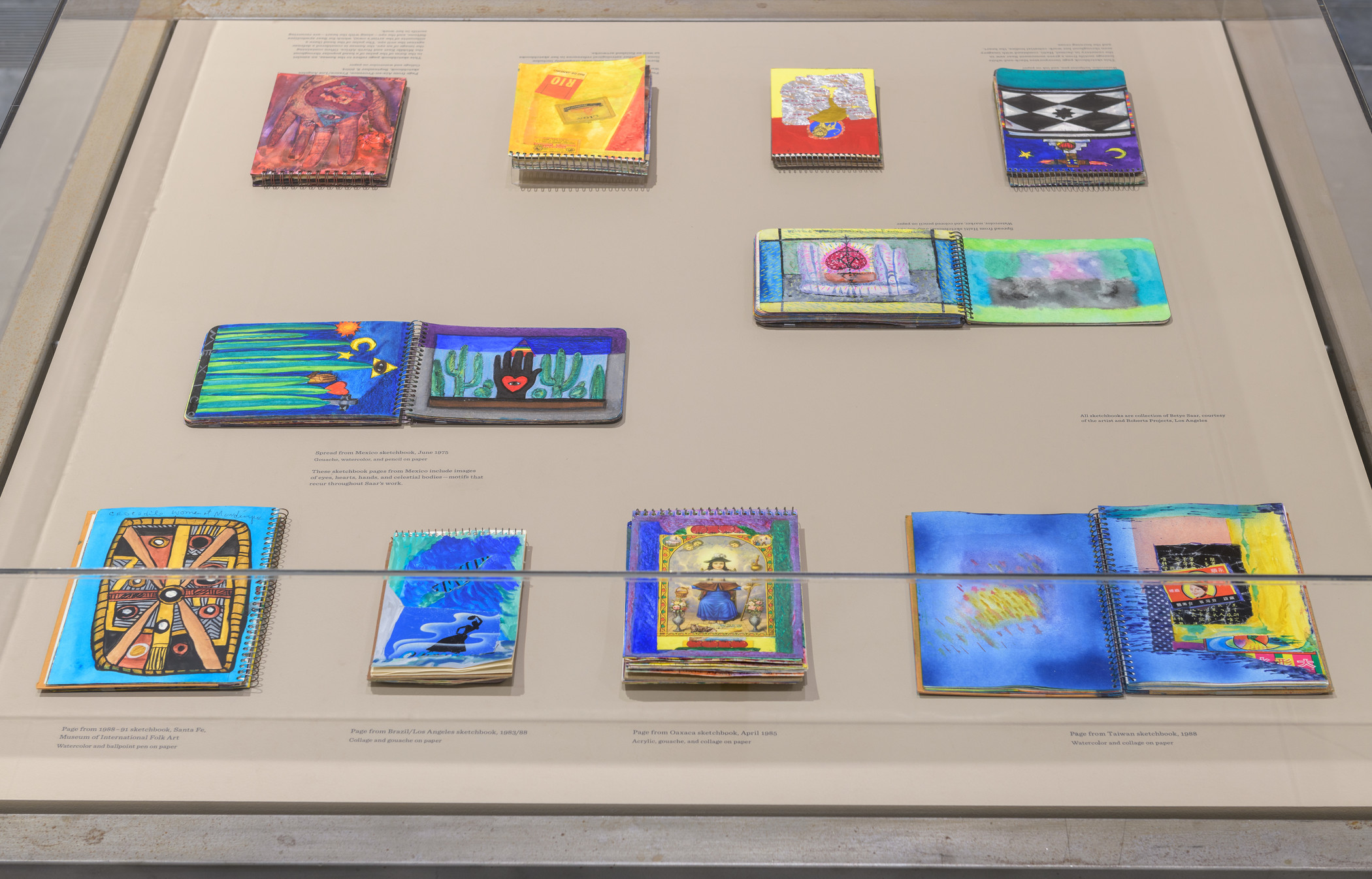 Not only does Betye Saar: Call and Response cover the arc of her career from 1968 to 2019—the first comprehensive show of her work in California—but it is also the public’s first opportunity ever to see Saar’s extraordinary sketchbooks along with related finished works and thus to gain insights into her creative process. Just like the artist herself, the exhibition is small but mighty.

Betye Saar: Call and Response is on view in the Resnick Pavilion through April 5, 2020. This article was first published in the Fall 2019 issue of Insider.