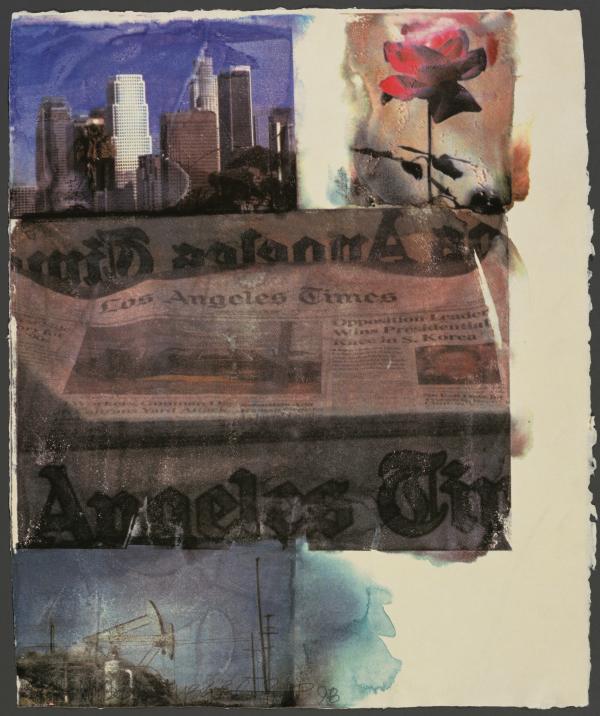 Robert Rauschenberg: In and About L.A.

In 1998, while working on a new series of prints in Los Angeles, artist Robert Rauschenberg (1925–2008) remarked: “L.A. is not an easy place. There is no typical L.A. But that’s what’s exciting about it for me... L.A. can change any way. It’s soft and malleable and flexible.” Rauschenberg’s perspective on the city can be applied to his artistic practice more broadly: one of the most pioneering artists of the last century, he produced a diverse body of work characterized by experimentation, the use of wide-ranging mediums and methods, and cross-cultural exchange. Contrary to being “typical,” Rauschenberg’s artwork consistently broke with convention, pushing beyond the boundaries of predefined genres and techniques.

Although Rauschenberg was born in Texas and lived primarily in New York and Florida, Los Angeles played a pivotal role in his artistic development. Rauschenberg’s relationship with Southern California began in 1944–45, when he was stationed at Camp Pendleton, about 75 miles south of L.A. While on leave one day he went to the Huntington Library, Art Collections and Botanical Gardens in San Marino—his first visit to an art museum. (LACMA was not established until 1961.) The experience proved formative; it prompted Rauschenberg’s decision to become an artist, and in the following decades he created some of his most groundbreaking work in L.A. LACMA’s exhibition Rauschenberg: In and About L.A. highlights the city’s indelible impact on his creative output. 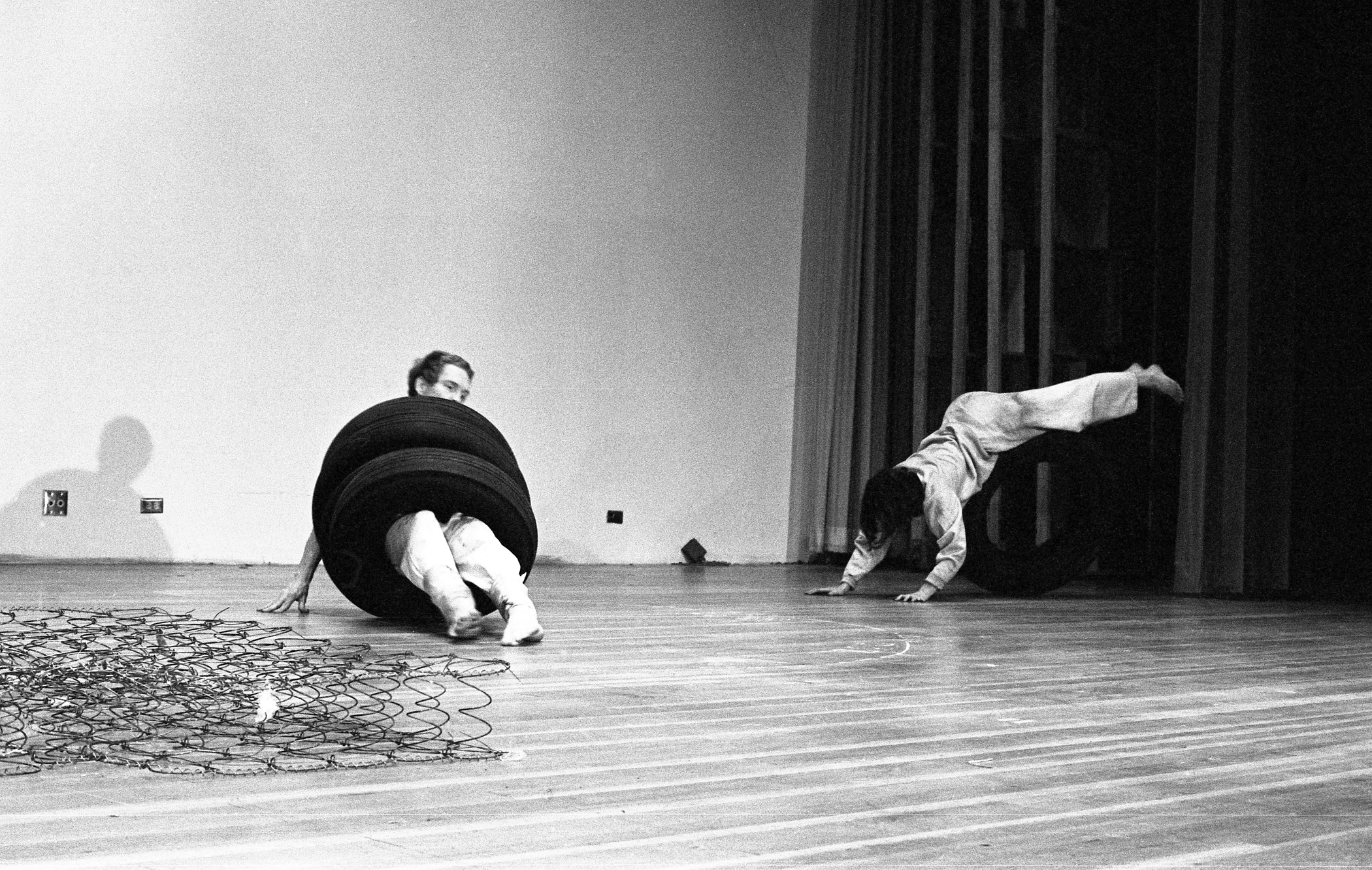 Los Angeles offered Rauschenberg several opportunities for collaboration and multidisciplinarity, which were hallmarks of his practice. In 1966, he participated in LACMA’s public program series Five Choreographers in Three Dance Concerts, for which he choreographed and danced in performances at LACMA and the Rollerdome in Culver City alongside fellow avant-garde choreographers Trisha Brown, Alex Hay, Deborah Hay, and Steve Paxton. 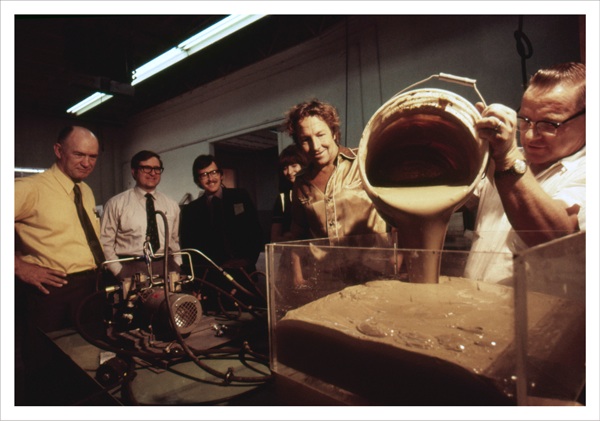 A year later, LACMA curator Maurice Tuchman invited Rauschenberg to participate in the museum’s Art and Technology Program (1967–71). Rauschenberg had cofounded Experiments in Art and Technology in New York in 1966, and both initiatives paired artists with scientists and engineers to create radical, technologically driven artworks. At LACMA, Rauschenberg collaborated with the multifaceted corporation Teledyne Technologies, Inc. to create Mud Muse (1968–71), a large tank filled with Bentonite clay that bubbles, gurgles, and spurts through a sound-activated pneumatic system. Mud Muse debuted in Tuchman’s exhibition Art and Technology, held at LACMA May 10–August 29, 1971. 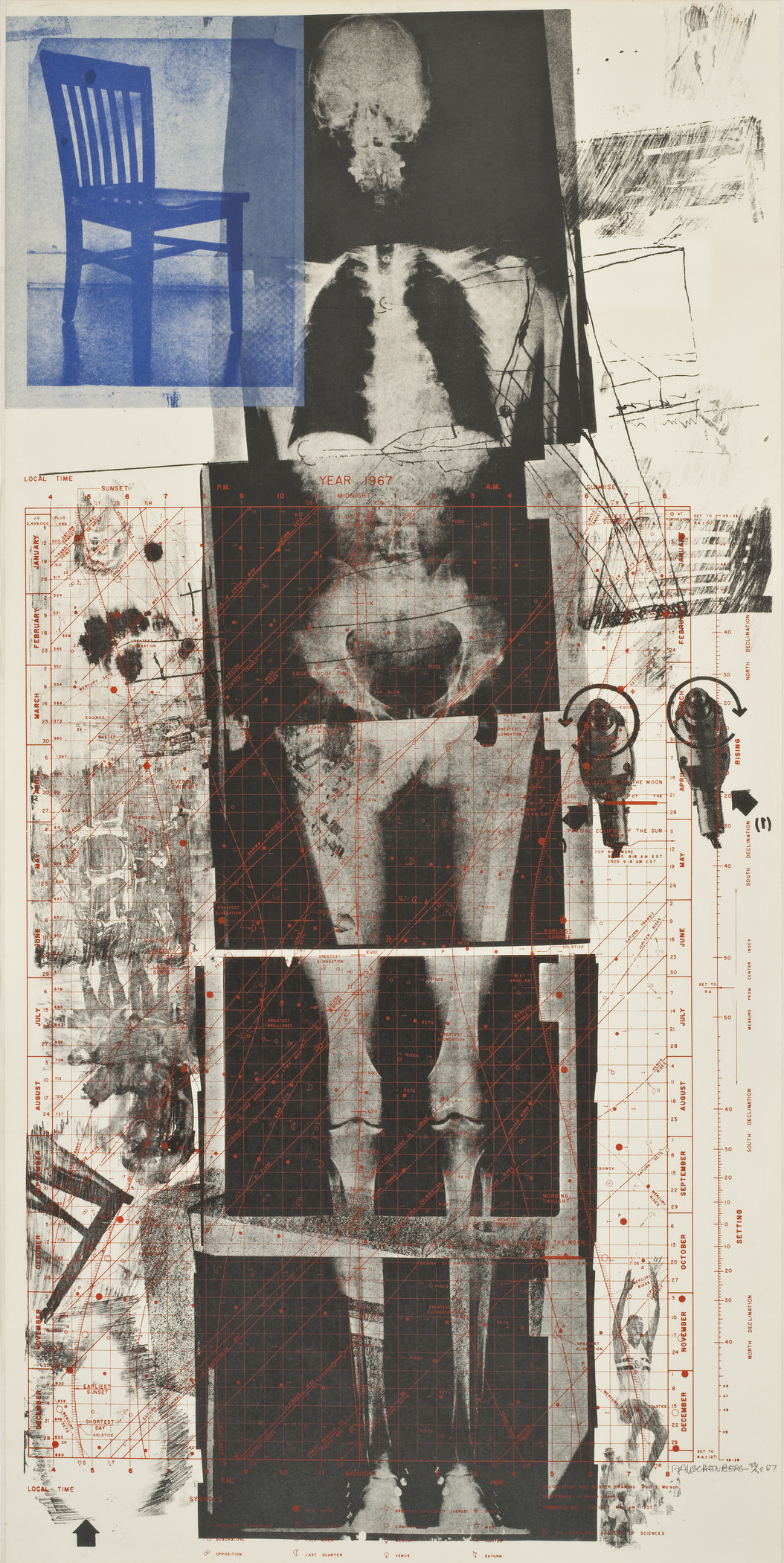 During this time Rauschenberg also began partnerships with the L.A. print workshops Gemini G.E.L. and Styria Studio, where he employed his technical ingenuity to challenge the traditional methods of printmaking. Rauschenberg’s life-sized self-portrait Booster (1967) was the artist’s first project with Gemini G.E.L., and exemplifies his innovative approach. At the time of its creation, it was the largest hand-pulled print ever made, and the first to combine lithography and screenprinting. Rauschenberg continued to collaborate with Gemini G.E.L. over the following four decades, creating over 250 prints with the workshop.

Currents (1970) was likewise revolutionary. After a fire in his New York City studio in 1969, Rauschenberg took refuge in Malibu, where he conceived Currents. Screenprinted at Styria Studio in Glendale, the work pictures collaged clippings from January and February 1970 issues of major U.S. newspapers, including the Los Angeles Times and Los Angeles Herald Examiner. At nearly 60 feet long, the print exceeded Rauschenberg’s previous experiments with monumentality and serves as a critical precedent to his subsequent works dealing with scale—such as Rodeo Palace (Spread) (1975–76), featured in Rauschenberg: In and About L.A., and The 1/4 Mile or 2 Furlong Piece (1981–98), which will be on view at LACMA October 28, 2018–June 9, 2019. When Currents was originally exhibited in 1970, Rauschenberg augmented its visual cacophony with an audio montage of contemporaneous news broadcasts. This audio component was recently rediscovered and digitized by the Robert Rauschenberg Foundation. Rauschenberg: In and About L.A. presents the Currents screenprint with its accompanying soundtrack for the first time in almost 50 years. 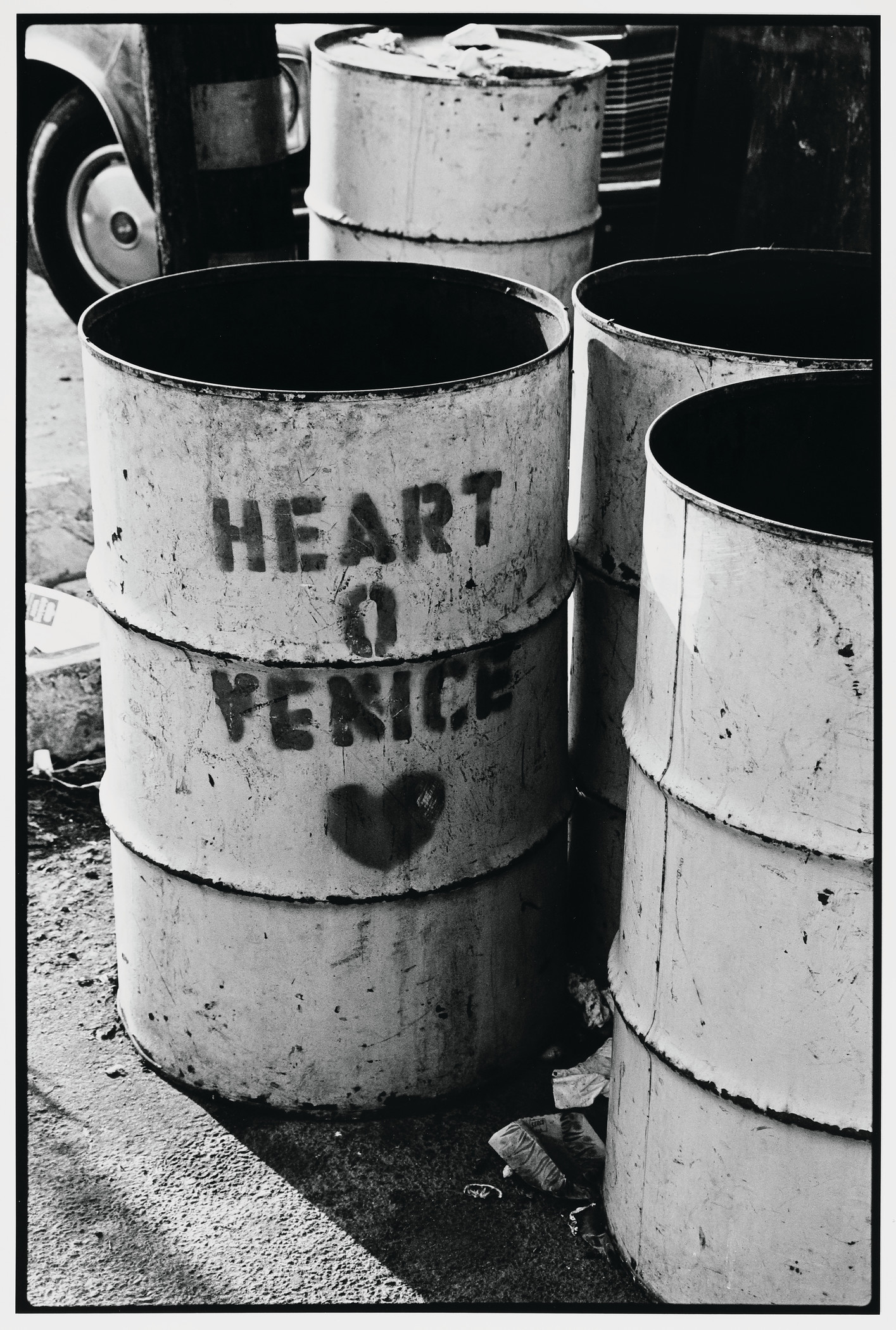 Rauschenberg often drew inspiration from his environment, and in 1981 he extensively photographed L.A. as part of his series In + Out City Limits. Instead of focusing on famous landmarks, his 95 black-and-white photographs of the city depict idiosyncratic details that capture its cultural, geographic, and architectural diversity. Rauschenberg turned his lens on L.A.’s urban terrain again 17 years later, taking hundreds of color photographs—a selection of which he transferred onto paper for his L.A. Uncovered screenprints (1998). Published by Gemini G.E.L., the vibrant, collage-like compositions were created to commemorate the 30th anniversary of Booster. 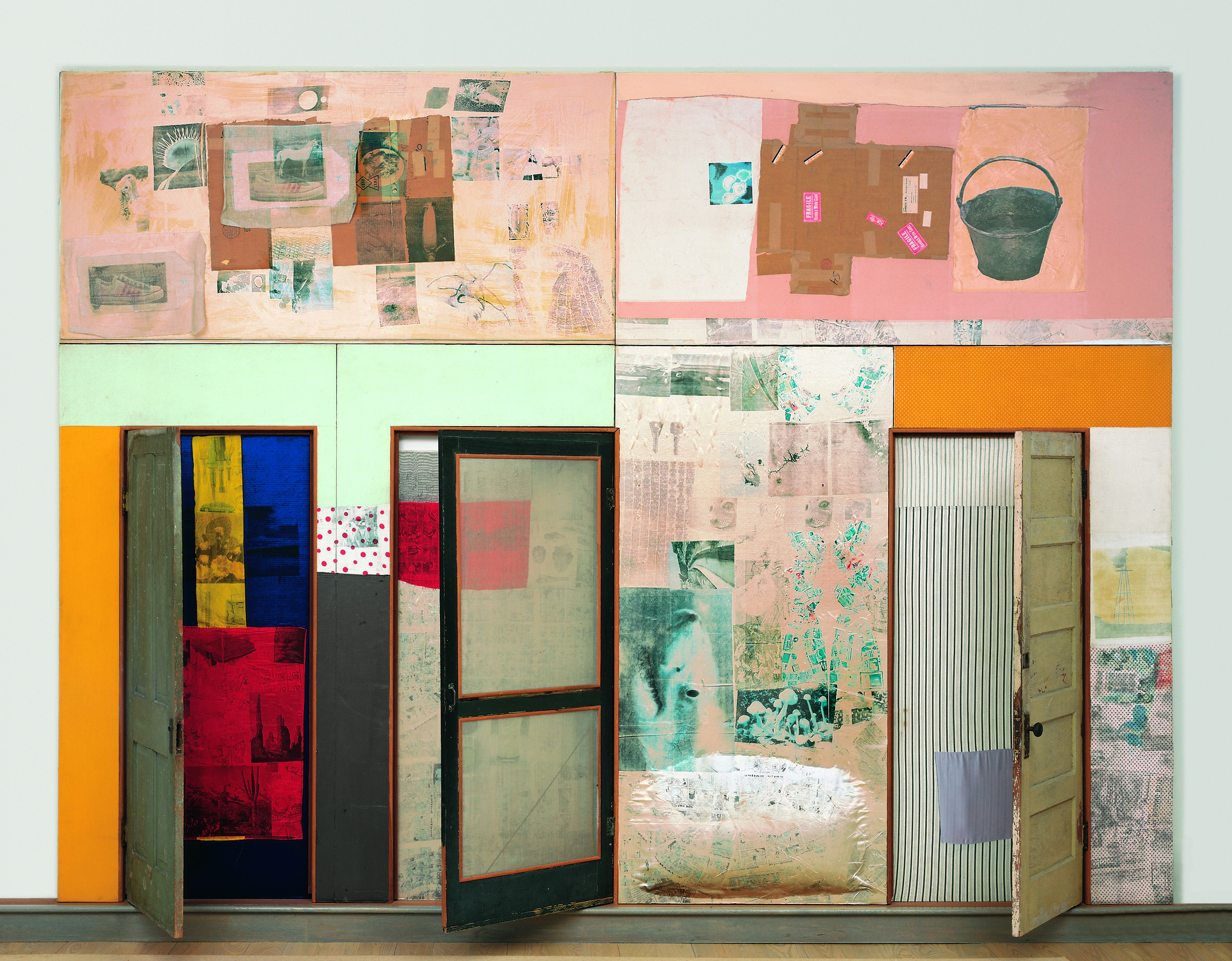 Also on view in Rauschenberg: In and About L.A. is Rodeo Palace, an early work from the artist’s Spread series on loan from a local private collection. “Spread” is a term used in the West to describe a wide expanse of land, and refers to the large scale of the works in this series. Rodeo Palace conveys Rauschenberg’s enduring engagement with photography and printmaking, and comprises a range of other materials and techniques. It is at once self-referential—recalling previous works such as his Combines—and a forerunner to later monumental projects such as The 1/4 Mile or 2 Furlong Piece.

With the exception of Booster, the works in Rauschenberg: In and About L.A. are on public view at LACMA for the first time. Come see the exhibition in the Resnick Pavilion through February 10, 2019.